Since the year 2000, Saltford Golf Club, near Bristol, has had seven John Deere 2500 Diesel Ride-on Greens Mowers - four Bs and 3 Es and they still run four of the originals to this day. They have just invested in a second John Deere 2500E from Tallis Amos Group (TAG) because in their experience - it’s the best precision greens mower on the market and can’t be beat! The 90ha, 18 hole course with a driving range and six-hole academy was founded in 1904 and is considered one of the finest, year-round courses in the West country and lays down a serious challenge for even the most seasoned of players. The club has around 650 private members with many visitors through the summer months. During June this year John Deere UK chose to hold their Regional Golf Tournament at the club which received endless compliments from all who played.

Course Manager Darren Moxham has been with Saltford Golf Club for nineteen years, eleven of those as course manager and it was his choice to continue investing in the John Deere 2500E because, in his own words, “We’ve used them for years and they have never let us down, giving us a perfect finish, every time.”

Darren uses two key 2500Es for the greens, sharing the 18 holes between them then utilising the retiring precision mowers firstly to the tees and then in the long term moving them on to utility work. Darren added “Even after seven years hard work, the John Deere’s maintain a high level capability and reliability which would be silly to trade-in when they make excellent tees and utility mowers, for very little cost. We decided to move on to the 2500E - with electrically powered cylinders, because they use far less fuel than the B version and environmentally, they are better for our greens. Now we have never had an oil hose break or oil spillage on the greens since we started using John Deere’s but by going hybrid we are reducing the potential further because we owe it to our customers and to the planet.”

Apart from the John Deere 2500B and Es, Saltford also run two Progators, a Turf Gator, an XUV Gator, HD200 Sprayer plus a 3038R Compact tractor with front loader.

“We used to buy our John Deere’s from BS Mowers in Bristol and their service was phenomenal” added Darren, “we were a little concerned when BS Mowers were taken over by TAG, but I can honestly say that the back-up from TAG is even better. Their sales executive, Nick Wilson is an ex Greens Keeper and certainly knows his stuff. If we have anything go wrong, TAG are in there like a shot and put it right. They have a parts delivery van that comes by once a month which carries lots of useful extras and it’s amazing how often we end up buying something.

“I’ve looked at the other machines on the market,” added Darren “and they just don’t compare with the 2500E which now comes as standard with tournament blades, so I can tighten the cut and speed-up the greens whenever I want to. I also dislike sitting on a precision mower with the cylinder spinning right under my feet - not like the John Deere, where I feel both comfortable and safe.

“I need a precision mower to do what I want, whenever I want it, and the John Deere 2500E does it every time. Couple that with the service I get from TAG - and ‘’I have a tournament winning combination every single time.” 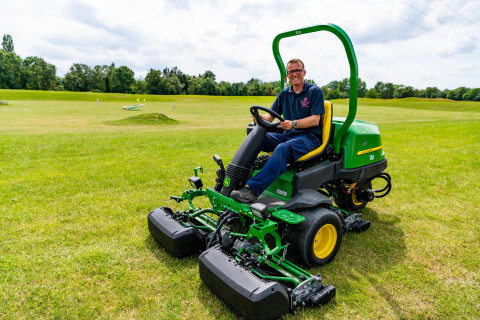 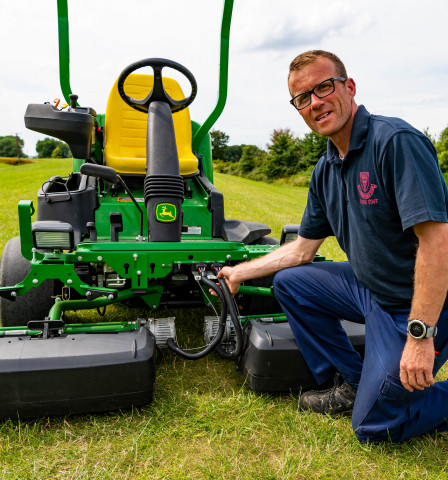 Course Manager Darren Moxham "I need a precision mower to do what I want, whenever I want it, and the John Deere 2500E does it every time."