Just outside Narberth, Pembrokeshire, the family farming enterprise of Ludchurch Farms, owned by Phil and Louisa Davies, run a highly efficient dairy operation. They milk 1350 head of Holstein Friesians, fed on a TMR basis and housed year-round in cubicles.
Milking is through a rotary parlour and all the milk goes for Mozzarella production. Herd average of milk sold per cow, per year is around 10,300 litres.

The farming enterprise is based on 1400 acres, mostly down to grass, including 300 acres of winter wheat, which is mainly used for straw and home-grown feed production as part of a TMR diet. Part of the feeding regime includes wheat and barley straw and the business has recently invested in a new, high capacity Teagle C12 Bale Processor - which was designed for contractors or ultra-large dairy units.

Farmer, Phil Davies commented, “We really only use straw for feeding purposes, most of which are in the form of large square bales, bought in from local suppliers. We wanted a reliable and high capacity bale processor that required minimal labour input, but also had a very high throughput and milling efficiency. I researched the market and, our local dealer Tallis Amos Group (TAG) also made the recommendation of the Teagle C12 and it’s been working very well here for us. It’s probably best to talk with our operator Rafel, who can explain the benefits of the machine for our operation.”

The Teagle C12 Bale Processor, can mill straw to between 20mm and 100mm depending on end user requirements, is probably the largest bale processor of its type and can take most large square bales through its top-loading hopper.

Bale processor operator Rafel Ras added, “Depending on the quality of straw and how dry or hard it is, we can usually get through around eleven tonnes of straw per hour. It’s a one-man machine, which doesn’t need a lot of operational management and so is very easy to use. We normally bunker around ten tonnes of straw in one go, to supply the Shelbourne Reynolds TMR mixer. Ten tonnes of chopped straw will normally last for about eight or nine days. We chop to about one inch (25mm) and we normally feed either 450kg or 600kg square bales into the hopper with ease. This Teagle C12 has a great processing capacity and we would normally get through ten tonnes in an hour or less.

What we like about this machine compared with other straw processors, is that it consistently mills the straw nice and short and so it blends with the TMR mix very well. Other brands tend to leave a lot of long straw and that would normally get wasted or picked-over by the dairy cows.”

Ludchurch Farms use a John Deere 6210R to power the Teagle C12 Bale Processor. Screen options enable variation of chop size. Bluetooth control from the operator can be effected from up to 50 metres from the machine and so maximises ease of use while loading. Concluded Rafel, “This is a really good machine and I really like working with it. It’s simple, easy to use and does what it says it will do. What else could we wish for?” 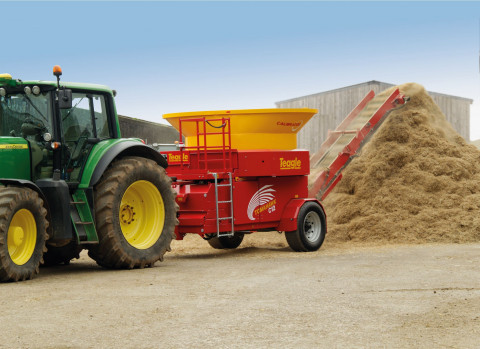