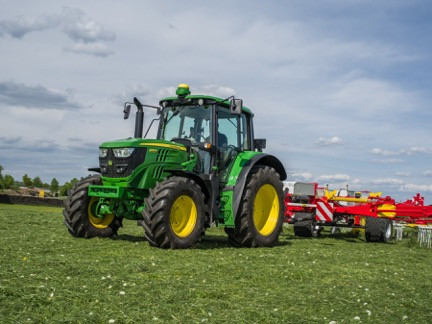 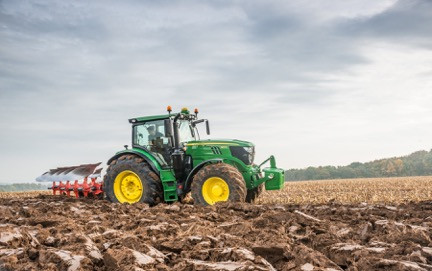 Expanding the John Deere range of mid-size 6R and 6M Series tractors, a total of 14 new four-cylinder and large frame six-cylinder models with Stage IV engines from 110 to 195hp will replace the current Stage IIIB compliant models from this summer.

Available from November 2015 (6R) and spring 2016 (6M) respectively, these new full-frame tractors feature improved manoeuvrability, enhanced operator comfort, a wide range of transmissions and up to six SCVs, as well as a premium front hitch option.

The 6R Series tractors offer up to six SCVs with individual pressure relief levers and a premium front hitch, while three mid-stack SCVs are also available to provide fast and responsive handling of implements. The 6M Series tractors can be equipped with three rear SCVs and a new PowerBeyond function, or four standard SCVs with three mid-stack SCVs.

The PowerBeyond hydraulic system is used as a pressure/flow source for additional functions equipped with independent flow control valves. An electrical loader-ready joystick is also available for use with John Deere’s new R Series front loaders (see separate release). Both the 6R and 6M Series tractors are specifically designed to accommodate these versatile new loaders, which feature new mounting frames and hood guards and are easy to attach and operate.

Comfortable power in a compact package